Every backpacker has been to Luang Prabang, therefore I assumed it would be as disappointing as Vang Vieng. However, the ancient charm of the old quarter was well preserved and was similar, however almost more genuine than Hoi An, Vietnam.  The architecture was simple yet refined and the open-air schoolhouses were especially unique.

The UNESCO protected peninsula was packed with 33 beautiful Buddhist Temples built between 1500- 1700. The lavish gold lotuses and bodhisattvas painted atop jet-black walls were exquisite. Although Theravada Buddhist Temples seemed more lavish and almost gaudy in comparison to Tibetan Buddhist Monasteries, I can appreciate the attention to detail and complex mosaics. 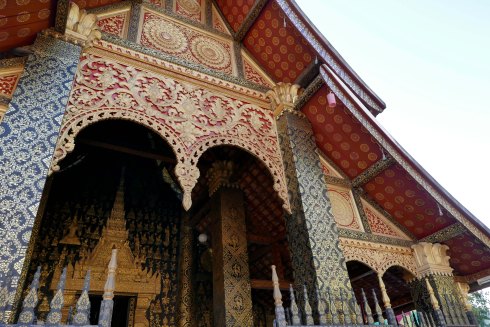 The night market in Luang Prabang was a blast and a great place to buy souvenirs and gifts. It was targeted toward tourists, and a variety of textiles, teas, coffees and jewelry were sold. Although Nick and I don’t have any room to shop, between the night market and Tamarind (a café that sells handmade jams, teas and spices), Luang Prabang could easily dent a traveler’s budget. The food stalls at the night market was a great find as an entire block was lined with 15,000 kip ($1.85) fill your bowl vegetarian buffets.

During our second day, Nick and I rented a motorobike and visited Pak Ou Caves (Buddha Cave) and Kuang Si Falls. First, we rented a motorbike to drive 25 km to the caves.

In Asia, everything has a cost. We rented a motorbike for 100,000 kip, filled it up with 20,000 kip worth of gasoline and were on our way. 25 km later we arrived at the local village and paid 3,000 kip to park. Then we walked through the village where we met our boatman and paid 26,000 kip to get taken across the river. When we arrived at the caves we paid 20,000 kip pp to enter. The caves are impressive and full of hundreds of Buddha sculptures and although beautiful, it is sometimes tiring always having to open your wallet.

After visiting the caves, we drove 25 km back to Luang Prabang then 32 km in the opposite direction to Kuang Si falls. Before entering the falls, we passed fenced in areas of 20+ Sun Bears. These lethargic bears were rescued from poachers and more specifically from the bile industry. Bears are hooked up to IV’s and their bile is extracted and sold in Vietnam. Bear bile is considered a delicacy there, however the practice of extracting is illegal. Thus, it is extracted in neighboring countries where although illegal not heavily enforced. In China this practice is legal and regulated and there are currently 10,000+ bears being used for the bile industry.

As we continued to walk, we could begin to hear the rushing water. The clear turquoise water reminded me of Havasu Falls in the Grand Canyon. Watching the multi tiered cascade falls flow over limestone rock was mesmerizing. It would have been easy to spend the entire day here as you can swim in the falls and hike to caves and natural springs.

*Travel Tip: To avoid the 20,000 kip entrance fee, take a motorbike or vehicle on the trail up to the natural springs. Drink a Beer Lao then hike down the falls.

The next day, Nick and I drove back to the village across from the Buddha Cave and on the way passed an elephant park where tourists spend time riding elephants through the jungle. This is an extremely popular attraction is SE Asia, however is an terrible industry for the elephants. Please, research and think twice before riding an elephant.

We took a boat across the river to some large rock features where routes were bolted by some American climbers in the late 90s. We arranged to be picked back up by our boatman 4 hours later. Nick and I had a blast climbing on some great rock and even some multi pitches overlooking the Mekong River. We had an audience of local village kids across the river and when we repelled down they were eagerly waiting for us on the beach. When we realized our boatman was not coming back for us we hesitantly asked the kids to boat us across the river. About 3/4 across the river, water began to rush into the boat. Quickly the boat sank and we found ourselves swimming after our shoes and gear. Our rope and quickdraws stayed dry but unfortunately this was the last of my iPhone. This trip has taught me to always expect the unexpected and remind yourself it’s all part of the journey.

Although you could spend many days in Luang Prabang it is quite expensive so Nick and I decided to move north to Laung Nam Tha. ps. Check out the video tab on our blog to view our video of Laos!