Within a half an hour of departing Delhi we were flying above the Himalayas to Ladakh (land of passes). The snow-covered glaciers were astonishing and soon we were descending through the clouds. All we could see was white until we were eye level with jagged mountains. My heart skipped a beat as I remembered the number of flights that had crashed in Jomsom. I remembered flying next to the remnants of a plane that had crashed a week prior and knew how often accidents happened. However, luckily this flight was in a larger aircraft and anytime that I’m nervous, I put my faith in the universe.

The plane landed at 11,500 feet and we took in our surroundings of white peaks and sandy desert hills. We spent the next day acclimatizing and exploring the town of Leh. There were virtually no other tourists and the combination of Tibetan culture and Mongolian dress made me reminisce. We visited the local monastery where locals practicing Tibetan Buddhism were spinning prayer wheels and reciting “om mani padme hum” (a compassion mantra to relieve all sentient beings from suffering) on their mala beads. We noticed the many closed shops and guesthouses and were thankful we came during the off-season. We were told that in the summer, it’s so busy that it’s hard to even spot locals at the market. As long as we could put up with the cold (high of 40s and low of 10s) then we would be rewarded with authentic interactions and pristine views. As we walked through town we were greeted with smiles and “tashidelay” (hello in Tibetan) or “julay” (hello in Ladhky).

Leh is an interesting city. Hunting and fishing is illegal in Ladakh and the town is powered by hydropower. Due to the heavy snowfall in the winter, the town lacks Internet access. The affects of tourism and global warming are very real. It is positioned in between the border of China and Pakistan, which results in a high military presence. There are many Tibetan refugees living in Ladakh who seek independence from China and nearby Muslims in Kashmir who have the support of Pakistan are fighting for independence. This area is rich in diversity and is politically complex.

We passed the Dalai Lama’s vacation residence and explored Thicksey and Hemmis Monastery. We felt lucky to be the only tourists as it made our experience more meaningful. We listened to the monk’s morning prayer and were perplexed when we saw monks with dreadlocks. We were told that these monks recently spent 3, 6 or 12 years meditating in solitude in caves in the mountains. They had no human contact and would only leave the cave at night to relieve themselves. A younger monk would deliver food, and the other monks idolized their sacrifice. I learned about this idea when I visited Nepal, however had never seen any monks who recently achieved this hardship.

Maitreya, buddha of the future

Later, we visited the nine-story Leh Palace built in the 17th century and Tsemo Fort. 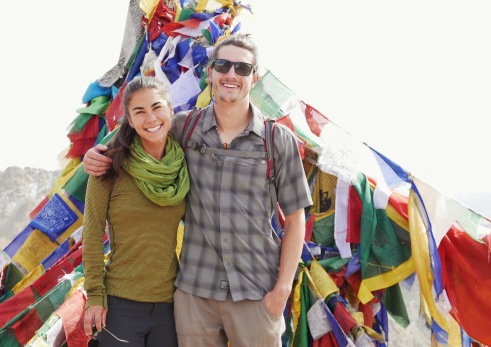 We spent the next 6 days trekking, 4 of which were in the Sham Valley. We had some breathtaking views of the Himalayas and starry night sky. The 2 feet of snow and freezing temperatures made for an adventure. We were the first tourists of the season and enjoyed empty campsites and welcoming locals.

We drank butter tea (butter, salt, Darjeeling black tea and water), ate tsampa (ground barley) and enjoyed chang (local barley beer). The royal castles dated back to the 1550’s and a Buddhist monastery to the 11th century, and all had been kept in impeccable condition. On trek, we came across a deceased golden eagle that must have weighed 25 pds. Our guide carried it all the way to the next village where he gave it to locals to use the feathers on their bow and arrows. 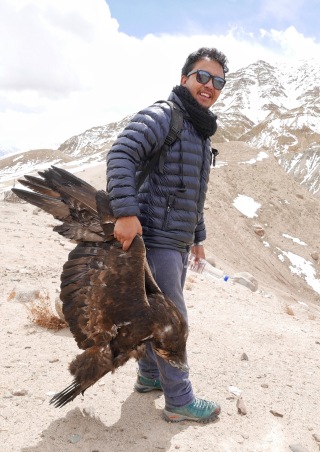 On our last day of trekking we were extremely lucky as we saw over 20 ibex. Our guide said that it was rare to see ibex in groups of more than 3 and it must have been mating season. We felt lucky to see them so close and watched the enormous elk sized animals traverse the rock face.

A quote from, The Paradox of Our Age, written on the city walls of Leh:

“We have bigger houses but smaller families; more conveniences, but less time; we have more degrees, but less sense; more knowledge, but less judgment; more experts, but more problems; more medicine, but less healthiness. We’ve been all the way to the moon and back, but have trouble crossing the street to meet the new neighbor. We built more computers to hold more information to produce more copies than ever, but less communication. We have become long on quantity, but short on quality. These are times of fast foods but slow digestion; tall man but short character; steep profit but shallow relationship. It’s a time when there is much in the window, but nothing in the room. – The Dalai Lama