Before I start this blog post, huge thanks to Nick who has done the majority of the planning on this trip. Wherever we are, it seems as if he is preparing for tomorrow while I am writing about the day before. Traveling has had it’s ups and downs but I am elated to have this guy by my side.

After crossing the corrupt border into Cambodia and overpaying for our visa, Nick and I headed to Kampot. This is a huge tourist town with an enormous expat community. Let me say, these expats are not giving older white males the best name. If it’s watching them flirt with teenage locals or cat calling and insulting tourists they could learn a thing or two about respect.

If you are not looking for the party scene you won’t find much in Kampot, thus Nick and I decided to head out of town to rock climb, visit Secret Lake and hit the crab market.

Nick and I were equipped with our climbing gear and excited to get back out on the rock. We headed to Climbodia, a sport climbing area set up by David, a friendly expat from Belgium. These routes range from 5.7 – 5.12 and scale some interesting cave features. Because we had our own gear we were able to climb independently, however we ended up spending some time around guided trips. These local guides were funny but had some questionable safety standards. Nick climbed a route named Snakeskin, which included 2 snake skins, 1 enormous hornet’s nest, 8 stings and a big fall!

Simple Things- a must visit for any vegetarian! The temph sandwich was the best sandwich I’ve had on my travels!

Epic Arts Cafe- this cozy cafe provides jobs to Cambodians who are deaf or have other disabilities. The food is fantastic and there are a variety of handmade crafts for sale.

In order to protect the southern Cardamom Mountains from poaching and logging, the Wildlife Alliance has turned this river village into a community based eco- tourism project. Nick and I spent 2 nights in Chi Phat and enjoyed our time trekking in the jungle and exploring waterfalls. From Kampot, we took a local bus (squeezing 19 people into a mini van) then a beautiful 2 hour, long boat to the the village. We felt comfortable with spending our money here as we knew this non-profit was helping the local community and conserving the environment. 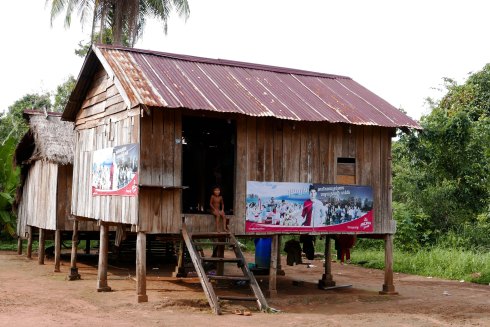 It was our trekking guide, Mr. Kim’s, first day on the job and he was an interesting character to say the least. He ran around laughing hysterically repeating, “Lisa, same same” (he thought my name was Lisa and was certain I was part Cambodian). He led us into the jungle where we saw some sort of bearded dragons, hawks, ant hills and pitcher plants. We spent time picking leeches off one another and continued our hike.

In 1982, Mr. Kim fought against Khmer Rouge and had the bullet scars to prove it. He said on hot days when they were without water, they’d drink the water collected from small pitcher plants (then proceeded to pick a pitcher plant and drink the water and insects inside). As a young child he recalled seeing U.S. B-52’s dropping bombs on Cambodia and visiting an American doctor for vaccines and medication.

We ended the 17 mile trek with a dip in the Chay Khpos Waterfall where we saw the extensive burn scars on Mr. Kim’s back. He had many stories, but so do most middle aged Cambodians. Their country has been through it all and we learned more about their dark history in Phenom Penh.

Nick and I only had a short period of time in the capital, Phenom Penh, and spent the majority of our time at the Toul Sleng Genocide Museum and Russian Market. We also wandered around the Royal Palace Plaza and riverfront which gave us an excellent view of Phenom Penh’s local nightlife.

*Warning to all of our young readers, the following information may be graphic and unsettling.

Tuol Sleng (also called S-21) was a high school that turned into the secret center of a network of nearly 200 prisons where people were tortured and killed by the Khmer Rouge. Between 12,000 and 20,000 people were imprisoned here from 1975- 1979 with only 12 confirmed survivors. 343 killing sites and 19,440 mass graves were later discovered throughout Cambodia. 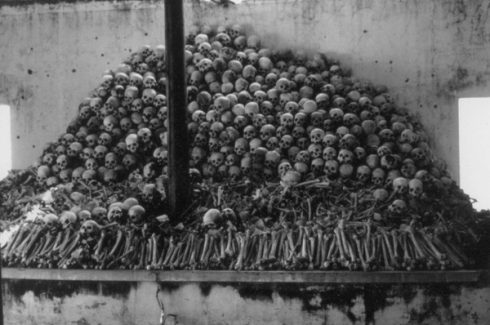 I’ve learned about the holocaust which was heartbreaking and devastating, but what was different about the Khmer Rouge genocide is it took place more recently (only 37 years ago). There are black and white film photographs documenting almost every prisoner, mass grave site, soldier, and torture device. There is still genocide occurring in the Congo and there is rarely any mainstream news about it. When will we learn from our mistakes? With changing political environment, I hope, with a heavy heart, that we will learn from the past and treat humanity with respect and dignity, excluding war and terror.

There was an error retrieving images from Instagram. An attempt will be remade in a few minutes.