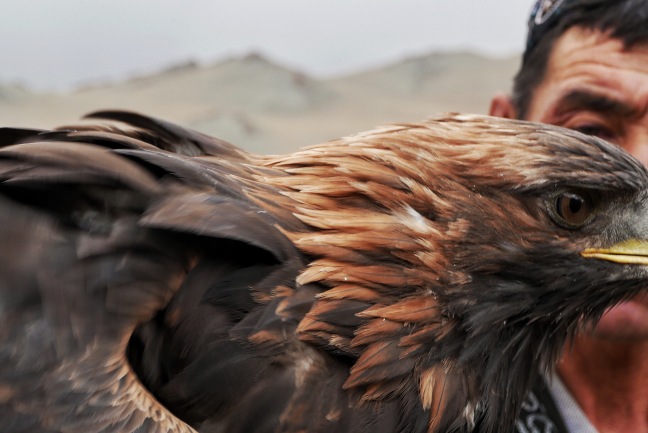 After our trek and the usual bumpy ride, we arrived back in Ulgii. That night we stayed at the Traveler’s Guesthouse. Contrary to the name, it is actually a collection of gers in an empty lot next to a gas station. The owner was helpful and we enjoyed showering and relaxing for the night.

The next morning we drove to Sangsai with Dosjan’s (the owner of Kazakh Tours) brother. He is a very competent and brave (crazy) driver. The eagle festival was very unorganized and felt more like a field day at school than a festival. At first our driver drove around the desert looking through binoculars for eagle hunters. We found some, however they didn’t seem to know where the festival was being held either. Finally, we arrived and soon eagle hunters were riding over the hills in all directions. In all, 50 hunters were present including the famous eagle huntress (Aisholpan). Although it seemed like a tourist trap in the beginning, about 50% of the patrons were locals by the time events began. The events were shortened due to a spreading goat disease which resulted in a low turn out. There were two eagle competitions. One, involved calling an eagle down from a hill to the hunters arm. In the second competition your eagle had to “attack” a dead rabbit that was being dragged behind a horse. The final event was between horsemen. Two riders would grab hold of a goat hide and pull each other (sometimes off their horses or far from the festival) until one let go. Between competitions we looked at souvenirs (bought some eagle feathers) and ate snacks (watermelon, fried dumplings and ice cream). At the end of the competition, a majority of the eagle hunters got very drunk and could barely ride their horses or hold their eagles (a little excitement ensued). Drinking is a very present issue among men in Mongolia. 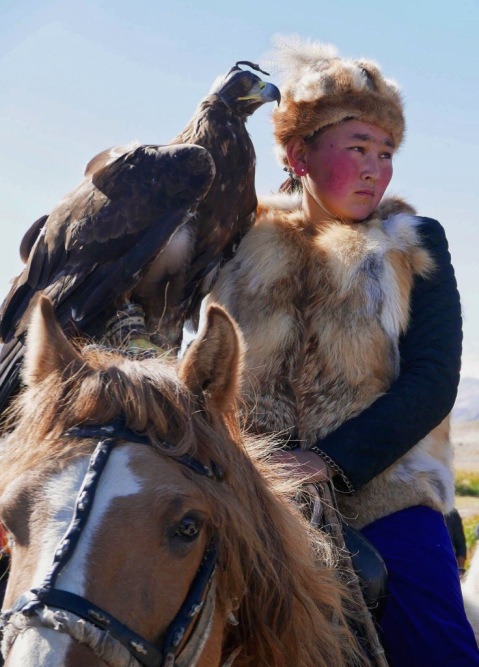 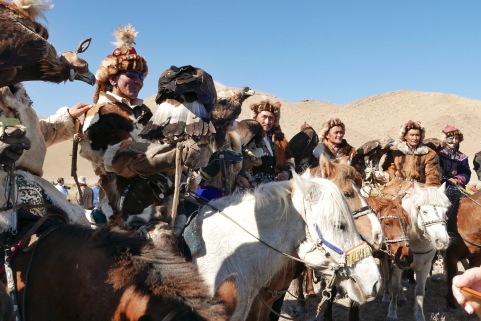 Due to the goat disease the second day of festivities were canceled, but it worked out for us as we both became pretty ill (with we think giardiasis). We instead spent the day lounging with a brief trip to the Ulgii mosque. Stacia was surprised to see that only men were aloud in the beautiful 2 story congregation room, while the women prayed in a tiny unmaintained white walled room in the back of the mosque.

The next morning we left to stay at an eagle hunter’s home for 3 days. This Kazakh family lives in a stone and mud complex rather than a ger. The family consists of a 55 year old couple, their 29 year old son, 26 year daughter in law, and their 20 day old baby. We were still moving slow and feeling ill as we had just started the antibiotics for Giardia, so we enjoyed the down time. We spent a lot of time “talking” (passing back and forth an old Kazakh- English – French phrase book) and of course, eating dairy products in the family’s living room. The language barrier allowed for a lot of awkward silence!

We learned that the man of the house’s father was an eagle hunter, as is he, as will his son and his newly born grandson. Only the Kazakh people of the West (Altai area) hunt with eagles and they need it to be stated on their license for it to be legal. He started eagle hunting in 1985. Since then, he has owned 70 eagles, however let 48 of them go quickly as they never caught a fox. He keeps a successful eagle for about 10 years. The eagle he currently has he captured when the eagle was 1 and it has caught the following foxes:

He will set his eagle free in 2020 when it hits sexual maturity. He sells the foxes, as they are used to make traditional Mongolian clothing (mostly headwear). The eagle either crushes the heart/face of the fox or suffocates it (this was unclear in our game of charades). His eagle is held in a small shed with little light but room to roam. We were graciously given an eagle blind (the small hat that covers the eagle’s eyes) as a gift. 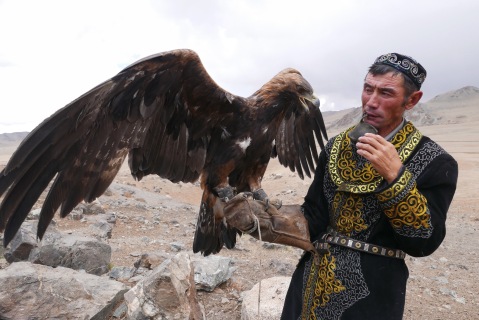 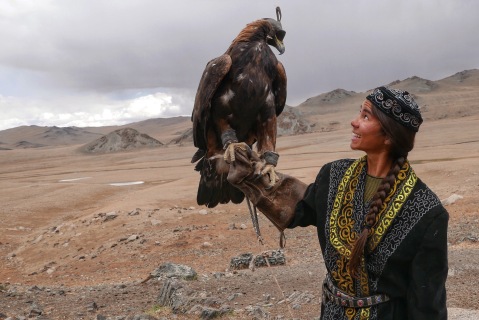 For breakfast and lunch we ate the traditional stale pastries, varieties of cheese curd, clotted cream, and butter. We drank about 10 bowls of salted yak milk tea a day and had handmade noodle, potato, and sheep soup for dinner. We enjoyed delicious fresh ira (Kazakh yogurt) before bed, as the yaks were milked an hour previously (yaks are milked twice a day). When we were served a communal rice and sheep dinner, everyone grabbed a spoon and started eating. If we even stopped eating to breath we were yelled at by 4 individuals “baloy che” (eat rice!) and when we ask for tea we are basically told we can have more tea after we eat more.

The next morning the yaks were milked, the animal droppings were collected and the sheep and goats were herded, excluding one unlucky sheep. We learned that in 2016, this family of 4 had butchered 1 yak, 1 horse and 20 sheep. The man of the house brought us into a stone and mud shed where he sliced the neck of the sheep and drained it’s blood. Within an hour the entire sheep was broken down. The lungs would be feed to the eagle, the large intestines were braided and hung (to eventually eat), and the small intestine was coiled into a climbing rope like figure and wrapped in the sheep hide. By the end, their was only a small bucket of waste which mostly consisted of blood, poop and digestives from the stomach. The stomach was washed and would eventually be blown up like a ballon, dried, and used to store butter. 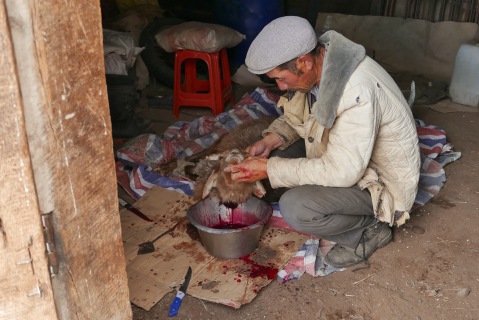 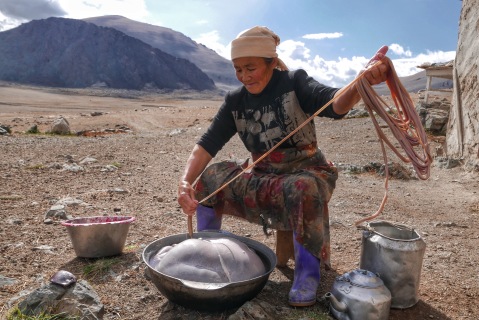 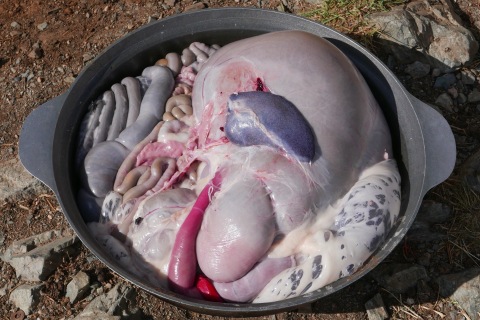 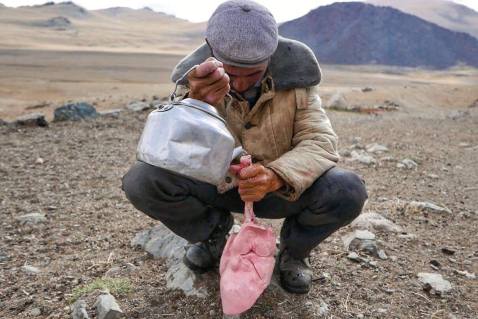 In the evenings we enjoyed listening to the older man play a Russian accordion, guitar and what looked like a 2 string ukulele. Stacia helped the older woman make bowsak jay (what we have been calling stale pastries) that are delicious when fresh. Nick helped herd yak and we continued to enjoy our last 8 days in Mongolia. 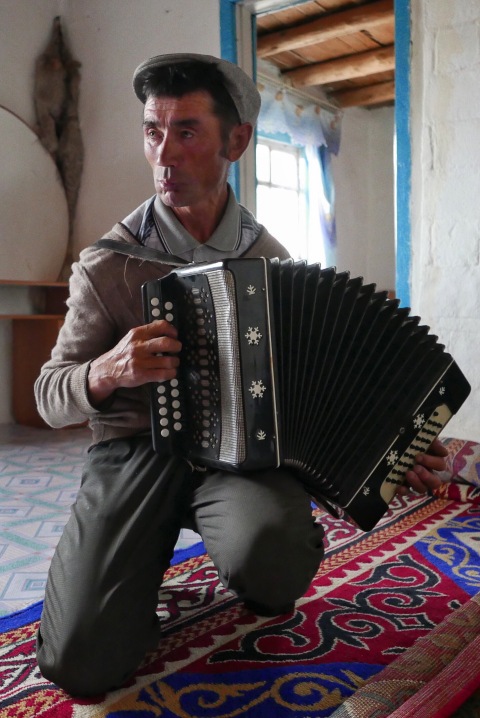 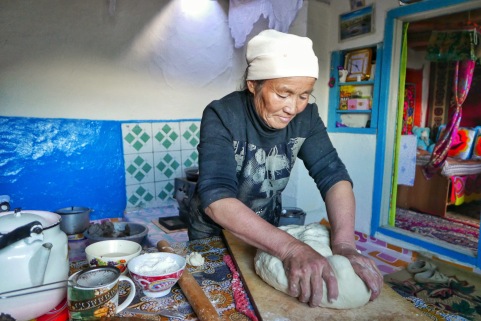 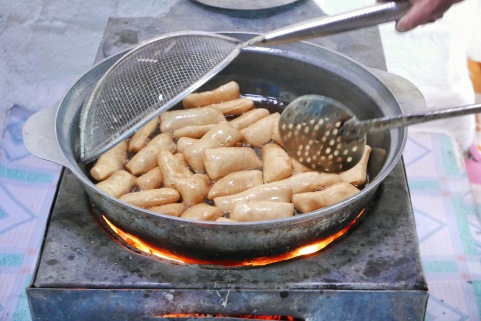 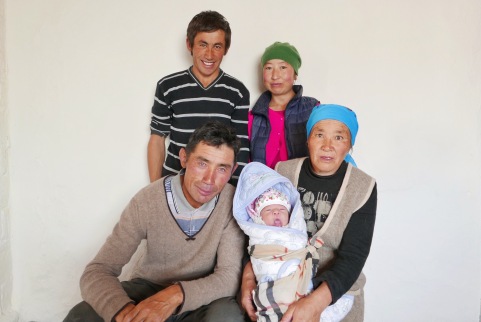 We are flying back to UB on the 22nd and are spending our last week in Mongolia volunteering at an orphanage. Stay tuned!