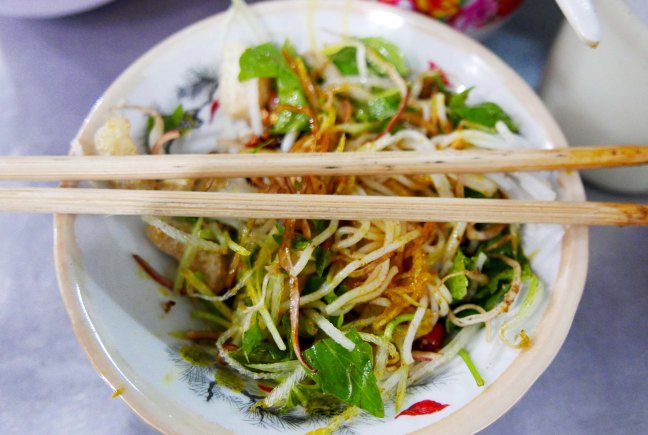 After 2 consecutive nights spent on a sleeper bus, Nick and I arrived to Dong Ha at 5am in the pouring rain. We were welcomed to Central Vietnam with the beginning of the rainy season.

Most tourists visit the caves in Dong Hoi, however due to flooding, Nick and I headed to nearby Dong Ha to visit the demilitarized zone (DMZ). This 6 mile stretch divides the north and south and millions of tons of ordinances were dropped here during the American War. It is estimated that about 1/3 did not explode. At the Mine Action Visitor Center, we saw various cartoons created to educated children on the dangers of these explosives. Every year hundreds of people are killed and injured, mostly children and ethnic minority groups. As always, learning and remembering war is heavy on the heart.

In 1966, just north of the DMZ, the villagers of Vinh Moc carved an extensive tunnel system to escape aerial and artillery attacks. These tunnels are 40- 75 feet below the surface and are extremely elaborate with 13 entrances. We met 1 of the 17 children born in the tunnels and can only imagine the life lived in the dark damp earth. As we walked to and from the caves we passed multiple craters from American artilery explosions. 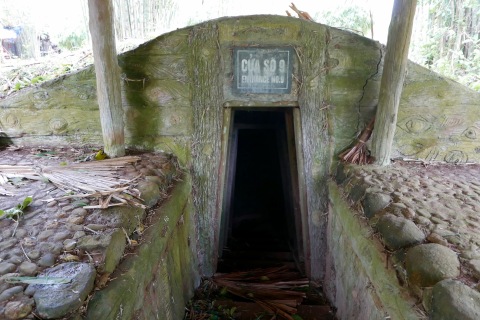 We purchased tickets for the 8am train from Dong Ha to Hue (pronounced ‘Hway’), however as always, things don’t go as planned. The train was not running (the reason lost in translation) and the next bus (that should be running hourly) would not leave for another 12 hours. So, Nick and I sat on the side of the highway and drank coffee. To our surprise, we were able to flag down a small van with a sign that read Hue. After overpaying and getting squished in with 22 locals we arrived in Hue, welcomed by another torrential downpour.

The main attractions in Hue are the citadel and tombs, however to see these one must pay almost half of Nick and I’s daily budget. Neither of us were extremely interested so we decided to rent a motorbike and take ourselves on a self guided tour of free attractions and food. The food in Hue has been the best on our travels thus far. The influence of the north and south make for fresh and spicy dishes. 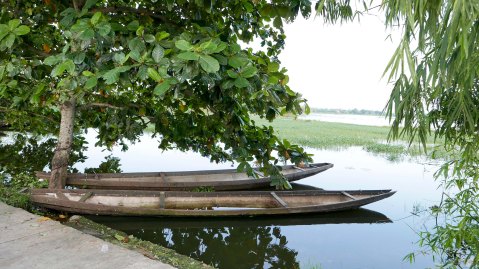 Thien Mu Pagoda – Behind this Pagoda you can see the car that Thich Quang Duc (monk) drove on June 11, 1963. When he arrived in Ho Chi Minh City, he got out of his car, sat in lotus position and self-immolated himself to protest the governments discrimination against Buddhists. This story has become a part of the communist party’s propaganda machine. 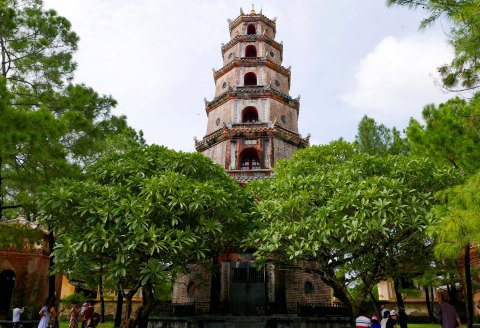 Dong Ba Market – A 2 story market complex with individuals selling produce, sweets and clothing. This is a must visit in Hue.

Gia Long Tomb – This tomb, of the first emperor to unite Vietnam and move the capital to Hue, is off the beaten track.

Ho Quyen – This is an overgrown stone arena where elephants and tigers would fight (1830-1904) as a royal pastime. As elephants often represented royalty, the tigers teeth and claws would be removed to ensure defeat. 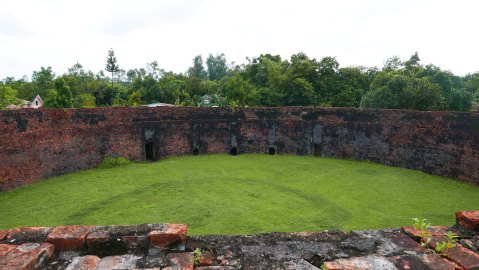 Hang Me Me- Order the Banh Beo (royal rice cakes topped with shrimp and pig fat) and Banh Nam. These are local specialties and unique eats. 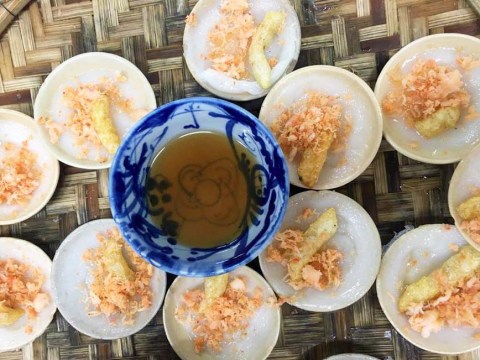 Com Hen- Order the com hen (rice, herbs and oysters) or bun hen (noodles, herbs and oysters). I ordered the bun hen (without the hen) and it was one of the most flavorful dishes I have had. I also ordered an unknown desert drink which ended up being sweet corn with milk and rice. 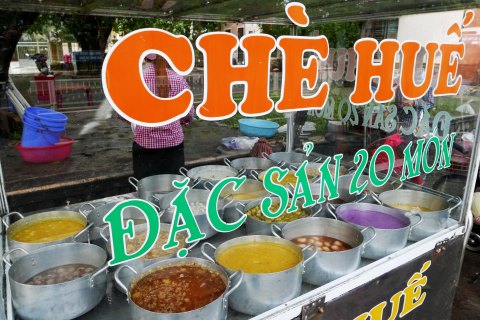 Lien Hoa – Maybe I am biased, but this was my favorite meal in Vietnam. At this Buddhist vegetarian restaurant we enjoyed fried jackfruit, banh beo, mecan (wheat gluten), spring rolls and sweet porridge.

Bun Bo Hue – A local dish similar to bun cha in Hanoi except with beef, fried oysters and lemon grass. 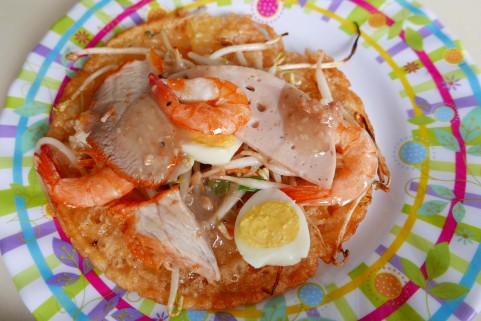 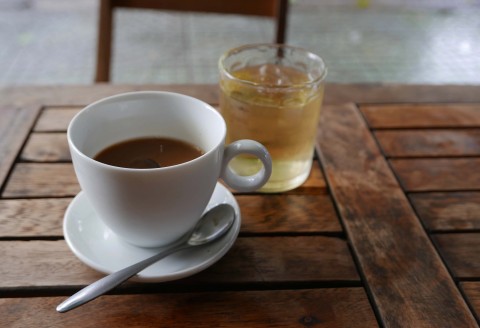 As we headed north, from the Gobi to Central Mongolia, the landscape changed drastically and reminded me a lot of Colorado. There were rolling hills, rivers, mountains, and forests. We saw thousands of animals a day and every animal looked so healthy, especially the horses. The camels were replaced with yaks, cows and ginormous birds. A cold front rolled in and the temperature was around 2 – 11 degrees Celsius. Similar to Colorado the weather seemed to change quickly, it will be a cold rainy morning and sunny afternoon. As we drove through various villages we searched for a post office, but after attempt number 4 failed we waited for our next opportunity. 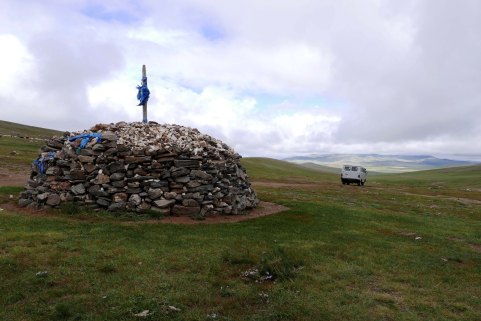 On day 7,  we left for a 2-day horse trek down the Orkhon Valley to visit a nomadic family. The horses were small and well trained. They were a bit skittish of shadows and trash (the trash is another issue entirely). We rode to the Tsutgalan Waterfall which was formed by unique volcanic eruptions and earthquakes about 20,000 years ago. Nick swam with the locals in the freezing river (a little too close to the 24 m drop). We rode up the valley in beautiful weather and enjoyed the magical scenery. 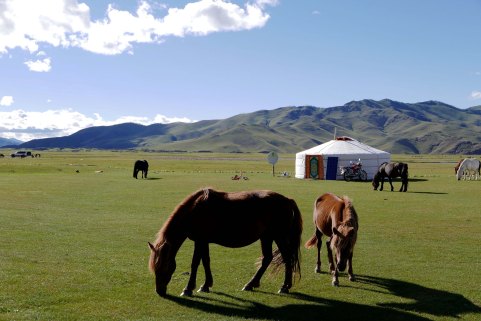 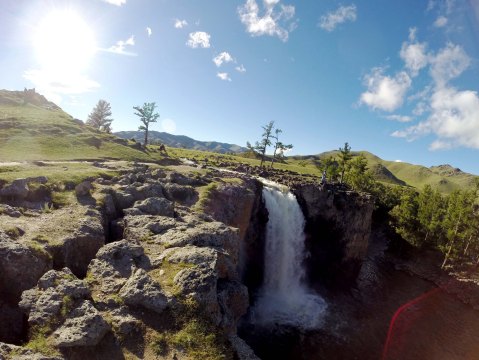 After 4 hours of riding we reached the family’s ger, bathed in the river, played games with goat and sheep ankle bones and entertained their 2 young children. Throughout the trip, we have fallen asleep to the sounds of baby camels crying, dogs barking, goats farting, and horses neighing, but tonight it was the sound of children howling like wolves. We returned on the horses the next morning and made our way back up the valley in the rain. We stopped for salted yak milk tea and made our way back to a family ger. This family ger has the most beautiful alter as the family man is extremely religious. I went back out on the horses to visit another waterfall while Nick rested his poisoned stomach. 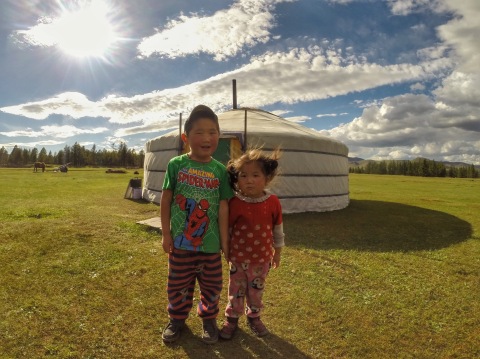 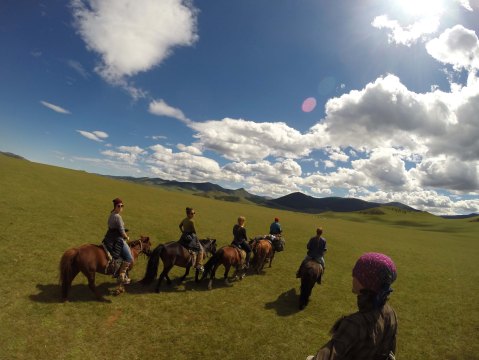 We left Orkhon Valley and after a few hours came across paved roads for the first time in almost 7 days. Our wonderful guide, Oyuna, asked if we wanted to see, what we thought she said was a pillar rock. Turns out she said penis rock (even better). In a valley, which represents a vagina, there is a small rock shaped like a penis where women come to worship in hopes of increasing their fertility. 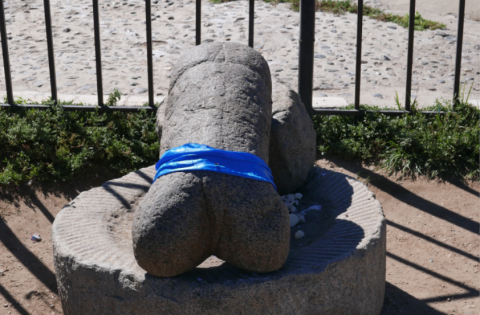 A few minutes down the road is Erdene Zuu Monastery. This is a beautiful compound made up of 108 stupas holding 3 old Tibetan monasteries built in 1583 and a newer monastery built in the 90s. This is worth the stop. There were so many paintings, statues, and block printings of various Buddhas and protectors. I learned about Shri Devi, the only female protector who destroyed all of the evil in the world by sleeping with the devil, killing him, and finally eating her own child that she made with him. I also learned about the only female Buddha, Tara, who has 7 eyes. Buddhism is so complex and I look forward to learning as much as I can. Outside of this compound you can walk to the ruins of the old capital, Karakorum. In the mid-13th century, Chinggis Khaan established a supply base here and his son ordered the construction of a proper capital. Excavated by a German exhibition in 1998, the foundation of the great hall is on display. We left the old capital, stopping at the 3 empire statue and headed to Tsenkher hot springs. 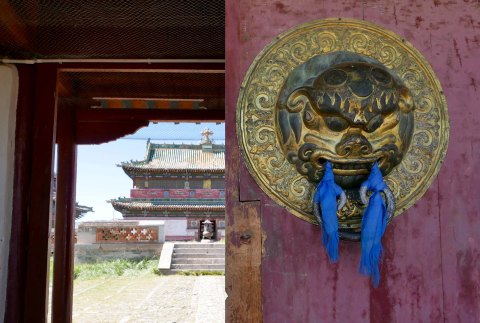 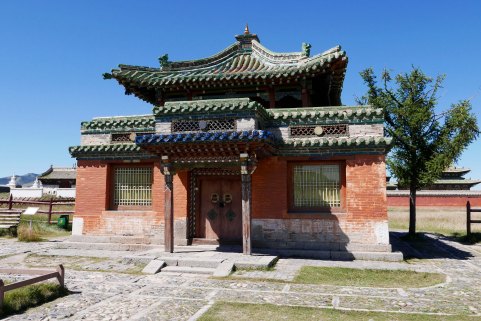 At the hot springs, we stayed at a tourist ger camp for the first time as this is one of the only ways to experience the sulfur hot springs. We felt extremely removed from the local community and missed fermented dairy products, but did enjoy the luxurious amenities (shower and charging outlets). The springs were relaxing and we hiked up to the source where the water comes out of the ground at 86 C and is bubbling. We left the next morning and stopped by Taikhar Chuluu Rock, Chuluut Gorge, and hundred branched tree (holy tree). As we moved north toward the white lake, we noticed more mountains, larger trees, pigs (making more pigs), and pines. 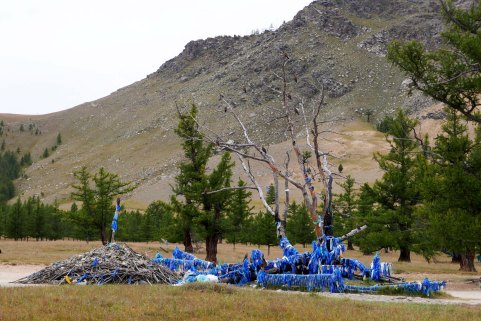 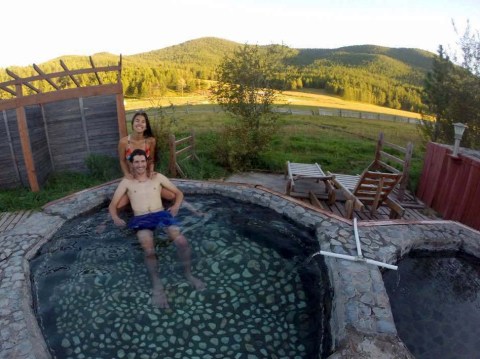 After the town of Tariat we left the paved road (much enjoyed for the 100km we were on it) for the white lake. As we moved up the mountain pass on a bumpy road (our vehicle almost sideways), we approached an ovoo (rock or wood pile to show direction or worship) then moved over the pass to see an enormous glistening lake. The Great White Lake (Terkhiin Tsagaan Nuur) is 20 km long and was formed by volcanic lava damming the Suman River. This lake reminded us of Lake Champlain, only undeveloped and pure. Our ger camp was located meters from the water’s edge and we woke up the next morning to the sound of seagulls. 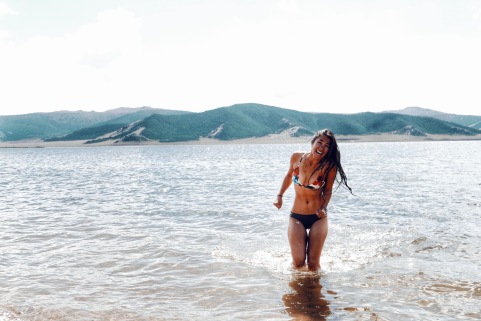 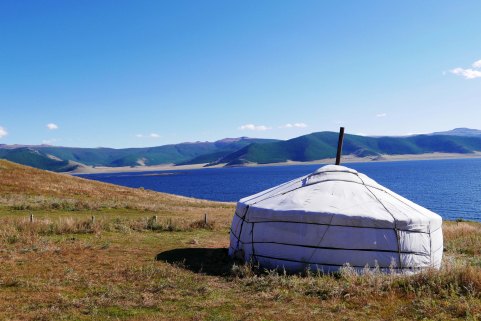 We hiked into Khorgo Uul, a 200 m tall extinct volcano that erupted 7,000 years ago and visited various caves on our way back to the lake. We had a relaxing afternoon reading in the sun and swimming in the cold water. The diverse landscape of Mongolia continues to amaze me. Our group played canasta before bed and we woke up sporadically to the grunts of yaks bashing into our ger. (Don’t let their beautiful dog cow combination fool you, if you get too close, they’ll try to charge you. I know from experience.) 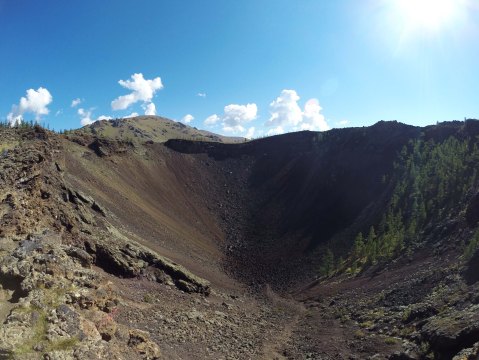 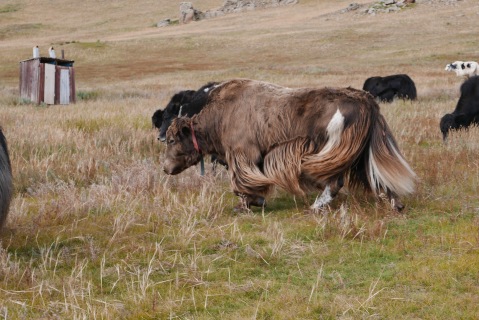